Home CBD Articles/News The booming CBD craze, explained
These are two drinks from the same store. They’re the same in almost every way. But this one costs $3 extra. All it took was a few drops of this stuff — CBD. It’s a cannabis compound you can buy in oils, chocolates, bath bombs, face masks, gummies, coffee, lotions, even dog treats. It’s everywhere. And its proponents claim that it can help with a lot of things: CBD exists right at the intersection of three huge consumer trends: The 49 billion-dollar herbal supplement industry, the growing anxiety economy, and the almost overnight rise of a legal cannabis marketplace. There’s still a lot we don’t know about CBD. But people are buying it. This is how much consumer CBD sales have grown in the past four years. And this is how much they’re expected to grow. For a product this popular, CBD is barely regulated and people tend to misunderstand its effects. So what do we know about it?
CBD — or cannabidiol — is one of over 110 chemical constituents in cannabis called cannabinoids. THC — or tetrahydrocannabinol — is a different cannabis chemical that causes the high associated with consuming marijuana. But by itself, CBD won’t get you high. You can inhale it as a vapor, or apply it to your skin, but a popular intake method is edible oil — since CBD is naturally soluble in fat. That easy-to-consume format is behind the explosion of many new products we’re seeing today. But it’s also led to a lot of misconceptions. For starters, people say CBD can treat everything from inflammation, to acne — even cancer. But there’s no proof that consumer CBD products can treat all those ailments. We don’t have that much data related to the therapeutic effects of cannabidiol. CBD has antioxidant and anti-inflammatory properties that have been shown to help treat psychosis, anxiety, movement disorders, multiple sclerosis, and epilepsy and seizures. And the FDA recently approved Epidiolex, a CBD-based epilepsy drug.
But there isn’t enough research for CBD to be prescribed as medicine for all of those other conditions. Right now, we don’t know a ton about how CBD affects the brain, or which doses or delivery methods work most effectively. And people who take CBD sometimes do it at risk to their own health, foregoing medically approved treatments or failing to investigate its interactions with other drugs. And the CBD that has trickled down to retail markets? It’s largely unregulated. Because of that, consumers often have no idea what they’re buying — and CBD products often don’t contain what they say they do. A) They might not even have the cannabidiol that is claimed on the label — but more importantly, B) is that some of them actually have THC in it. In 2016, the FDA issued warnings to 8 CBD oil companies after finding that some contained either no or barely any CBD, and some contained illegal amounts of psychoactive THC. And a 2017 study of 84 CBD products purchased online found that almost 70 percent were mislabeled.
But even when consumer CBD products are accurately labeled, the doses tend to be very low. When you get a few drops of CBD oil in a drink, you’re probably getting about 5-10 milligrams of CBD. You’d need 30 times that to reach the amount of CBD that current research has found to have stress-relieving results. So even though CBD has a ton of medical promise, the dose in the average CBD coffee is pretty negligible. But even at those levels, CBD products other than Epidiolex are still technically illegal. When you go down the street and you buy your latte with cannabidiol, that is still considered “federally illegal. At the state level it might not be, depending on which state you’re in, but federally speaking, it is still illegal. The DEA maintains that CBD is federally illegal — but it won’t bother going after anyone possessing or using it. And because the DEA won’t prosecute, anybody from any state can walk into a store or go online and buy CBD products. Attitudes in health care are shifting: in December 2017, the World Health Organization
concluded that CBD is not harmful. In January 2018, the World Anti-Doping Agency removed it from its prohibited substances list. And, if passed as it stands, the 2018 farm bill would legalize CBD and industrial hemp nationwide. CBD isn’t bullshit. It’s a substance with a lot of potential. But the quantity and quality in today’s consumer products is often more of a scam than a reliable wellness supplement. What’s next for CBD depends on research. But right now, its popularity is proof that the absence of data doesn’t prevent people from selling products. Instead, when you can claim everything — you can sell anything.
cannabidiol cannabis business cannabis legalization news cbd cbd:thc hydroponics liquid marijuana legalization 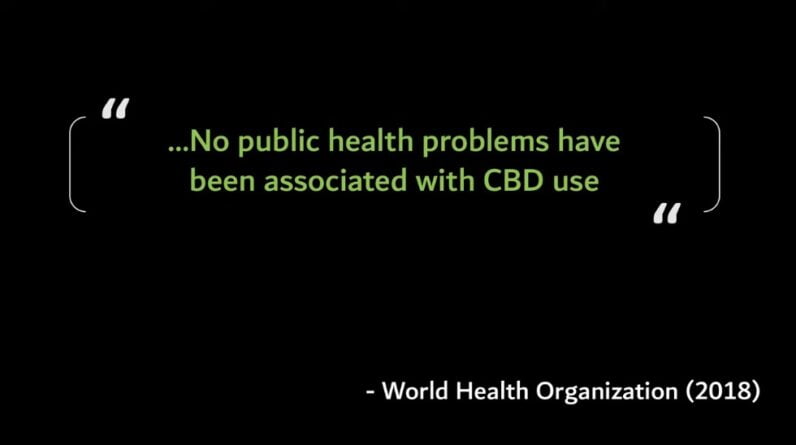